Felipe Mendez (Colombia) and Gabriel Raff (Argentina) tested positive for recombinant EPO during out-of-competition controls (OCC) conducted in concurrence with the 2019 Campagnolo GFNY World Championship in NYC, which was held on May 19.

During the control, Mendez tried to claim his twin brother’s identity, who was also registered for the race, but did not compete. Then on race morning, Mendez showed up at the race start with a “broken” wristband, which seems like an attempt to further hide his identity. Mendez finished 71st in 4:51:39. 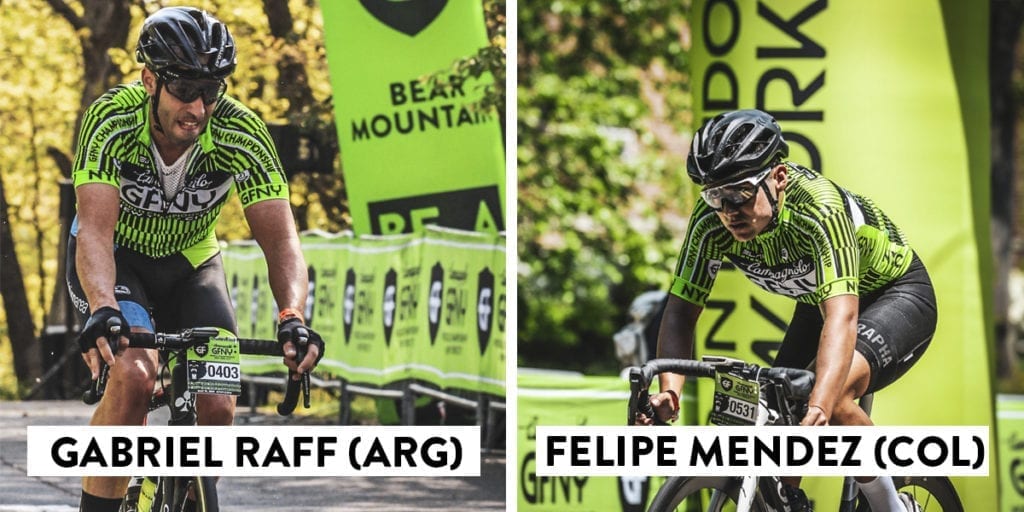 Both cyclists have been disqualified from the Campagnolo GFNY World Championship and receive a lifetime ban from all GFNY events (Rule 9.3).

Both were among several randomly selected athletes out of a testing pool of 60, which contained riders with a legitimate chance to place in the top 10 overall or win an age group.

These are the sixth and seventh positive doping controls in GFNY NYC's nine-year history.

GFNY is the Global Cycling Marathon Series. GFNY races are open to professionals and amateurs like – similar to running and triathlon events, where all competitors toe the same start line, take on the same course, at the same time and are chip timed from start to finish.

"It's simple: you can't catch cheaters if you don't perform doping controls,” says GFNY CEO Uli Fluhme. “These results show that testing is necessary and that it works. Unfortunately, most large races still don't test which sends a clear, yet terribly worrying sign: doping is allowed here.”

"We don't allow course cutting at our races so why would we look the other way when it comes to doping? GFNY riders train hard for races. They deserve a fair competition. We owe them doping controls, even if the costs are now well over $15,000 each year. Not testing the athletes is a selfish, cost saving decision from a race director. It forces everyone to take drugs to try to level the playing field.”

In addition to a lifetime ban for dopers at GFNY races, the race's rules also state that a rider who tests positive at GFNY has to reimburse the cost of the doping test. Furthermore, such rider has to reimburse GFNY for any damages to its reputation that are a consequence of the positive doping control. If the rider is part of a team participating at GFNY, the team can be held liable for this damage [GFNY rules].

A rider who is currently banned by WADA from competition may not participate in any GFNY event. After the ban, he/she is allowed to participate, but has to start at the back of the field, with the timing chip removed and will not be in the results. This allows for social reintegration despite a lifelong ban from competing at GFNY. Several riders have taken part in GFNY over the years in this way.

Checking for Motors in Bikes

Since 2015, GFNY also randomly checks bikes for motors. Current technology allows to invisibly integrate inaudible motors into the frame that produce up to 250 Watts for 30 minutes, which increases a top rider's output by more than 50%. High end motors barely the size of a plum can be integrated into the hub to create up to 50 Watts for a few seconds: enough to secure the race-winning move.

The top men's and women's bikes were inspected at the finish line of the 2019 Campagnolo GFNY World Championship race in a parc ferme. No motors were found.

Main Focus Remains on Providing a Great Experience for All Riders

"Competitive sport at the top is important to us and has its place, which is why we take it seriously," adds GFNY President, Lidia Fluhme. "That said, our main focus remains on providing a superior experience for all GFNY participants, especially those for whom it is a life-long goal to do their best on a challenging course. A race for elite riders requires police support with just a 15 minute rolling closure. At GFNY, however, we ensure hours of closures and right of way for anyone who takes on the challenge and provide all GFNY riders the chance to Be a Pro For a Day™."

Riders get to BE A PRO FOR A DAY by competing against others, themselves and the clock in a personal endurance challenge.

At all GFNY events, riders have the chance to qualify for the elite racer corral at the GFNY World Championship in NYC by placing in the top 10% (20% at regional championships) of their age group.

The 10th annual GFNY World Championship New York will be held on May 17, 2020. The race features the world's most international peloton with riders from over 90 countries. Athletes take on a challenging 100-mile route from NYC to Bear Mountain to Fort Lee to compete against each other, the clock and themselves in a personal endurance challenge.