GFNY NYC is your race through American history

At the start of GFNY in 2019, I found myself on my bike, suspended above the Hudson River on the lower deck of the George Washington Bridge, surrounded by 5,000 fellow racers from over 90 different countries. Even though this was my third consecutive GFNY, I stood there, shaking my head in disbelief thinking, “WOW, a bicycle race has shut down the busiest bridge in the world!” The bridge remains open through snowstorms, high winds, repairs, maintenance, and accidents. And all of this in a country where cycling is certainly not a national pastime. It seemed to me that the magnitude of this bridge being closed just for the sake of our bicycle race was being lost or not fully comprehended by most of us.

It also occurred to me that since a great majority of GFNY racers are either from another state or another country, there’s a pretty good chance that most of the riders around me on the bridge would enjoy some insight to where they were, what they were looking at, where the racecourse would be taking them, and the significance of it all.

We compiled this “Points of Interest Guide” to help you get to know the GFNY racecourse from a slightly different perspective. It’s so much more than just rolling hills, quaint towns and Bear Mountain. This guide will make your race experience and trip to New York more fulfilling. 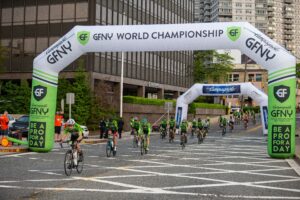 At the start line, we are suspended above the Hudson River, between where once two American Revolutionary War forts defended the river. Fort Lee was just south of the bridge in New Jersey, and Fort Washington was just north of the bridge on the New York side of the river. Cannon fire passed right through where we are lined up for the race start, as Colonial Americans fired down upon British ships sailing up the river. On November 16, 1776, British forces overwhelmed and captured Fort Washington. After the battle surviving Americans fled across the river to the safety of Fort Lee. Margaret Corbin was a patriot nurse at that battle who remained beside her husband operating a cannon. When her husband was fatally wounded and unable to operate the cannon, she immediately took his place, efficiently loaded and accurately fired the cannon, until her left arm was nearly severed. Margaret never fully recovered from her wounds, yet her bravery and devotion did not go unnoticed on the battlefield. A few years later, her valiant service was recognized by the newly formed US government as she became the first female recipient of a lifelong pension.

Highly Recommended: Visit Fort Lee Historic Park before or after the race. It is located on the racecourse and is less than 1 mile from the GFNY Welcome Zone. 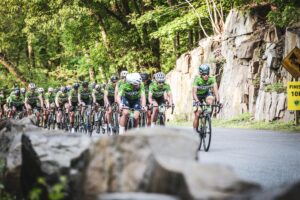 The majority of the race takes place on the banks of and the cliffs above the Hudson river. Native American’s called the Hudson River “a stream that flows both ways” since it is an estuary which ebbs and flows with the ocean’s tide. The Hudson River, which serves as a major thoroughfare between New York City and the rest of the state, was also the most strategic 150-mile-long battlefield of the Revolutionary War. The river separated the northeast from the rest of the country. British control of the Hudson would mean dividing the Northern American Colonies in two. Whichever side controlled the Hudson would control communication, transportation and the entire course of the war.

The magnificently steep cliffs here are the Palisades, called “We-awk-en” by the Lenni Lenapes Native Americans which means “rocks that look like rows of trees”. By the late 1800’s the Palisades were being heavily quarried for building foundations, city streets and piers in New York. If you have ever ridden on New York City pavé, chances are you rode on blocks of rock quarried from these cliffs. The growth of New York City was taking place at the expense of the destruction of New Jersey. It was the activism of local Women’s Clubs from nearby towns like Englewood which eventually passed legislation to preserve the Palisades and create the Palisades Interstate Park Commission (PIPC). This was the late 1890’s and, despite having no right to vote, women were remarkably still able to persuade politicians. The PIPC was given power to acquire land and preserve scenery which is what they did along Henry Hudson Drive and Bear Mountain.

MILE 9 / Alpine Climb: You think climbing this is hard…

After the British captured Forth Washington, they had their sights to capture Fort Lee along with the 2667 American troops stationed there led by American General Nathanael Greene. The British planned to approach Ft. Lee by surprise. During a heavy rainstorm on November 20th, 5,000 British troops sailed six miles north, well out of sight of Fort Lee, and landed near the base of Alpine Climb. They proceeded to climb directly up the muddy cliffs, with heavy packs, dragging cannons and supplies uphill with barely a trail beneath their feet. Their plan was to then march south to Fort Lee. From the top of the Palisades in Closter, a farmer spotted the British, immediately mounted his horse and rode straight to Fort Lee to warn the Americans of the impending attack. This warning provided just enough time for the American troops to make a hasty evacuation westward towards Hackensack to join the rest of Washington’s troops. If that anonymous Closter farmer had not warned the Americans, Fort Lee would have easily been captured by the larger British Army and the American Revolution would have ended that day. This anonymous Closter horseman is the “Paul Revere” of New Jersey and his image is on the Closter Borough seal. The decision to retreat was also strategically decisive as it bought precious time for the American army to regroup and play cat and mouse with the British.

When they finally arrived at Fort Lee, the British were pleased to find it abandoned and fully stocked. They captured 12 drunk American soldiers who had remained behind, 50 cannons, ammunition, and 1,000 barrels of flour. This was the darkest hour of the American Revolution, yet had the American troops not suffered and endured through it, the war would have been over. Which ties nicely to my most inspiring cycling quote which comes from the book Romans. “We rejoice in our SUFFERINGS, knowing that SUFFERING produces ENDURANCE, and ENDURANCE produces CHARACTER, and CHARACTER produces HOPE, and HOPE does not disappoint.

MILE 17 / Piermont: Where Paper is Made 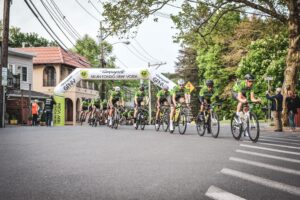 It’s a bridge so we must mention it. As you make the left-hand turn into Piermont, look to your left and you may get a glimpse of the red painted towers of the Sparkill Creek Drawbridge built in 1880. Chains lift the bridge when an operator turns a crank. It’s simple and functional, very much like a bicycle.

The Piermont aid station is a great place to view the new Tappan Zee Bridge off in the distance. The Tappan Zee Bridge is the second Hudson river crossing which you will cycle directly beneath during the race. It is worth mentioning because this new bridge has dedicated pedestrian and cycling lanes which are still being constructed. Piermont and nearby 9W are popular routes for local cyclists, and soon we will be able to cross the Hudson River and explore new routes and destinations like Tarrytown and Ossining.

Older local cyclists like myself will recall the giant Piermont Paper Mill which dominated the waterfront space. Today, it is replaced by rows of condos with art galleries, restaurants, shops, and of course Piermont Bike on the ground floor. The world’s first affordable cardboard box (the kind used for cereal, then and now) was invented in that paper mill. Locals were sad to see the mill demolished, and when demolition workers had a difficult time removing the giant flywheel, they were told to leave it. The flywheel can be seen prominently on display in the courtyard. 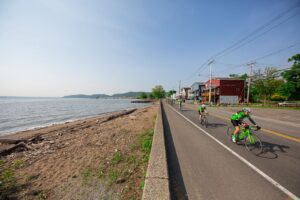 By July 16, 1779 George Washington’s Army had won few battles but managed to keep the British at a stalemate. The British has secured Stony Point with a perimeter of cannons. The approach was swampy and then escalated to steep and rocky. General Washington organized his best trained unit, the “Navy Seals” of back then, and used a midnight stealth sneak attack which was uncommon at the time. His men approached with bayonets affixed to their muskets. Their muskets were deliberately unloaded to prevent any misfires which would alert the British. Once in position, a second American unit located in the opposite direction, fired muskets and made noise as a diversionary tactic. In less than 30 minutes and with minimal loss of life and injuries, the Americans took control of Stony Point, only to abandon it within a few days. This was the first-time guerrilla warfare tactics were used by Americans and they proved to be successful.

Highly Recommended: Visit Stony Point Battlefield Historic Site (between Haverstraw and Bear Mountain) and experience their living history cannon and musket firings. Reenactments and a functional replica of the camp are open to the public between April and October.

MILE 40 / Bear Mountain base: From Prison to Park 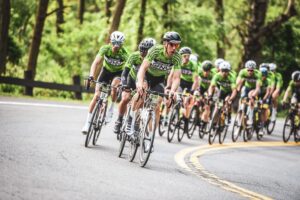 In 1908, Bear Mountain was not a park yet, and New York State had decided to relocate Sing Sing Prison from across the Hudson in Ossining, NY to Bear
Mountain. Construction of the prison began on what is today the great field in front of where the Bear Mountain Inn stands today. Concerned about the prison and its location, the Harriman family agreed to give the state 10,000 acres of land to be used for a state park and one million dollars to administer it, as long as the prison building ceased. With this endowment, the Bear Mountain State Park was born.

During the Revolutionary war, Fort Clinton was built at the base of Bear Mountain, and fort Montgomery was built about a 1/4 mile to the north. To block passage of the British navy up the Hudson River, the Americans stretched a 75-ton iron chain across the Hudson River. The chain was secured to floating logs with sharpened tips and the forts guarded the chain. The Bear Mountain Bridge marks the spot where the great chain once stood. The chain was effective, and more were stretched further north and fortified by West Point. Pay attention and you will see remnants of the chain preserved and displayed throughout the region. 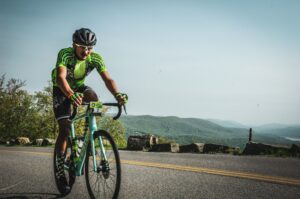 This scenic road to the summit of Bear Mountain was built almost entirely by manual labor between 1932-1934 and is named after George Perkins who served as the president of the PIPC for 20 years. This is where taking in the spectacular views can ease the pain as you climb to the top of Bear Mountain. 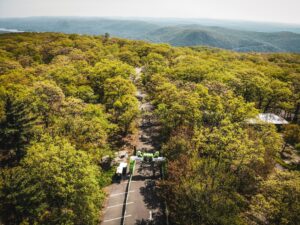 At an elevation of 1283 feet, Bear Mountain is the most well-known peak of the lower Hudson Valley, as well as the highest point of the racecourse. After filling your water bottles and grabbing some food at the aid station, it is almost mandatory to appreciate the view looking south. If you are going for the win, a top ten finish, or have been here before, you can be excused not to stop. From the top of Bear Mountain, you have a complete aerial view of the entire racecourse below, complete with visual markers. Look directly south and you will see George Washington Bridge, the race start/finish. Then follow the mighty Hudson River, through Piermont, Haverstraw, all the way to the base of Bear Mountain. Slowly pan your head to the right and a tall radio tower clearly marks the summit of the Cheescote climb.

History is alive on the GFNY course and in the surrounding area. There are many historic sites to see along the route and to visit while exploring the GFNY area. If you are coming from outside the NYC area for the race, do what you can to soak in the history of the region, and how a nation and its industries were born along the mighty Hudson River.