Long route riders are taking part in a competitive race. All finishers are ranked overall and in their age group. Categories are offered only for long course participants.
Overall results are based on gun time. Category results are based on chip time.
Your racing age is based on your age on December 31 of the race year. 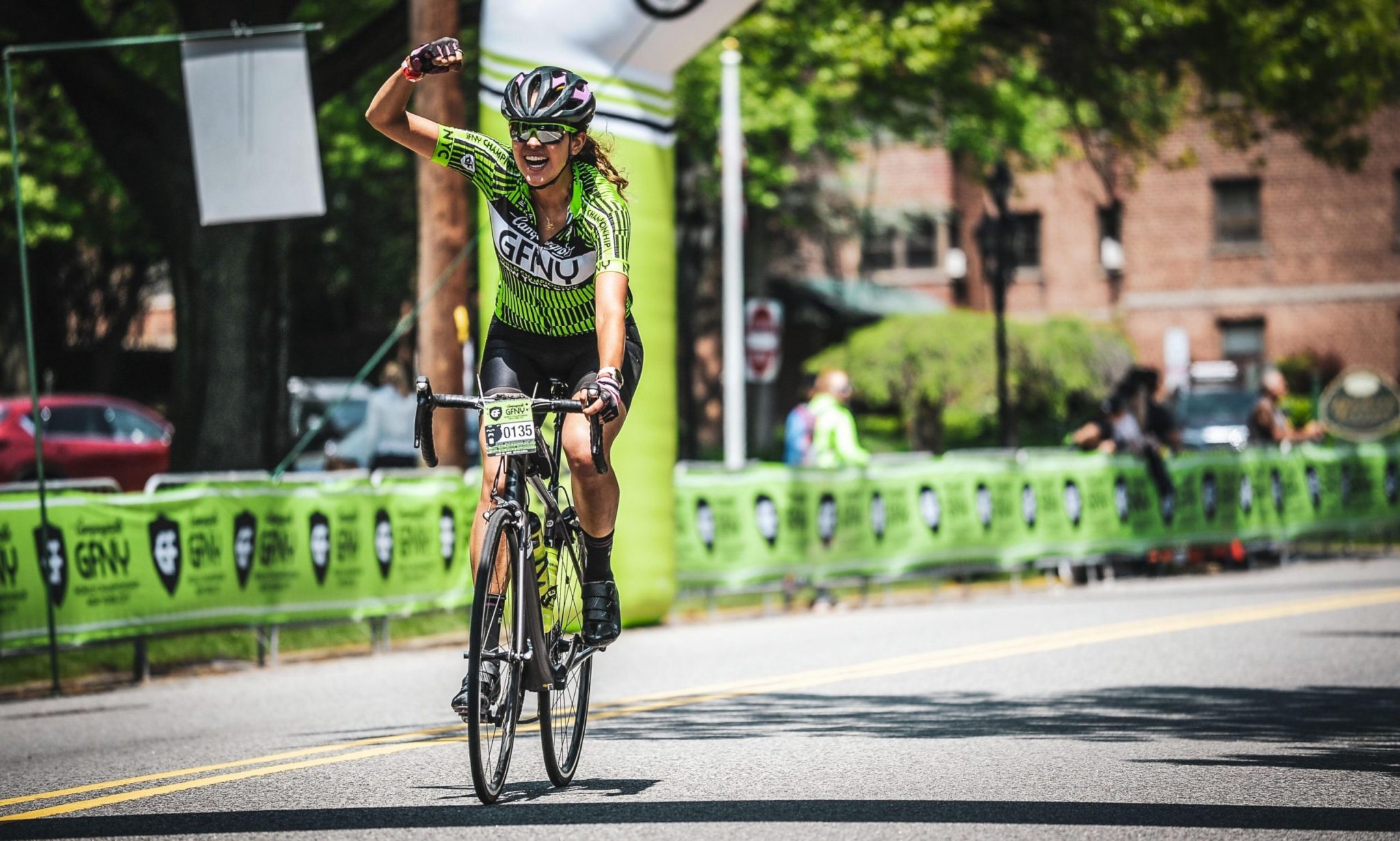 An age group exists as a competitive category if there is at least one athlete of that age and gender taking place in the race.

Individuals can also register as members of a team to take part in the GFNY Team Competition. 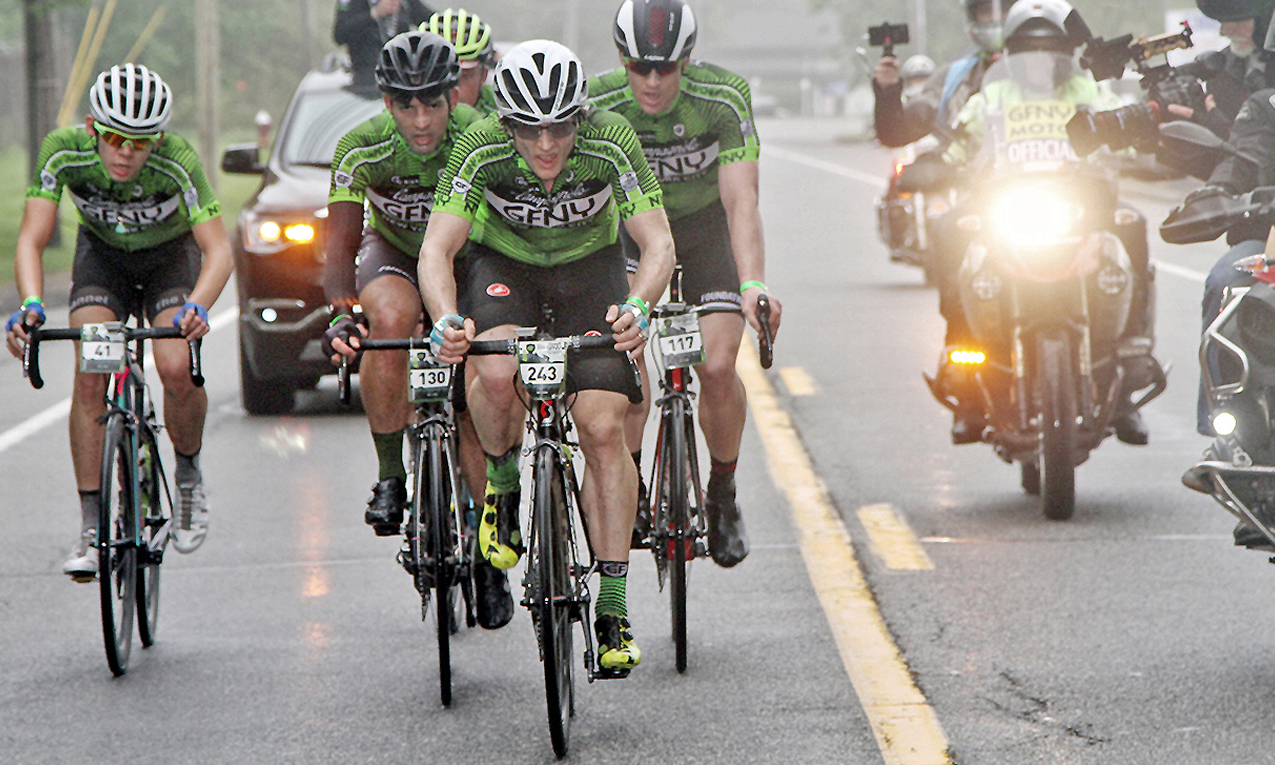 Individual GFNY riders can register as members of a team to take part in the Team Competition. Simply enter your Team Name in your registration and all riders with the same team name will be ranked together.
You can add or edit your team name at the time of registration, or anytime until 21 days before the race by logging into your gfny.cc account and editing your ticket. If you miss the 21-day changes cutoff, no problem - come to Registrations & Data Changes booth at the expo and we will change your team name onsite.
If your team would like to line up in the start corrals together, you can line up in the corral of the group member with the highest race number. Group members cannot move forward to a start corral allocated to lower start numbers. 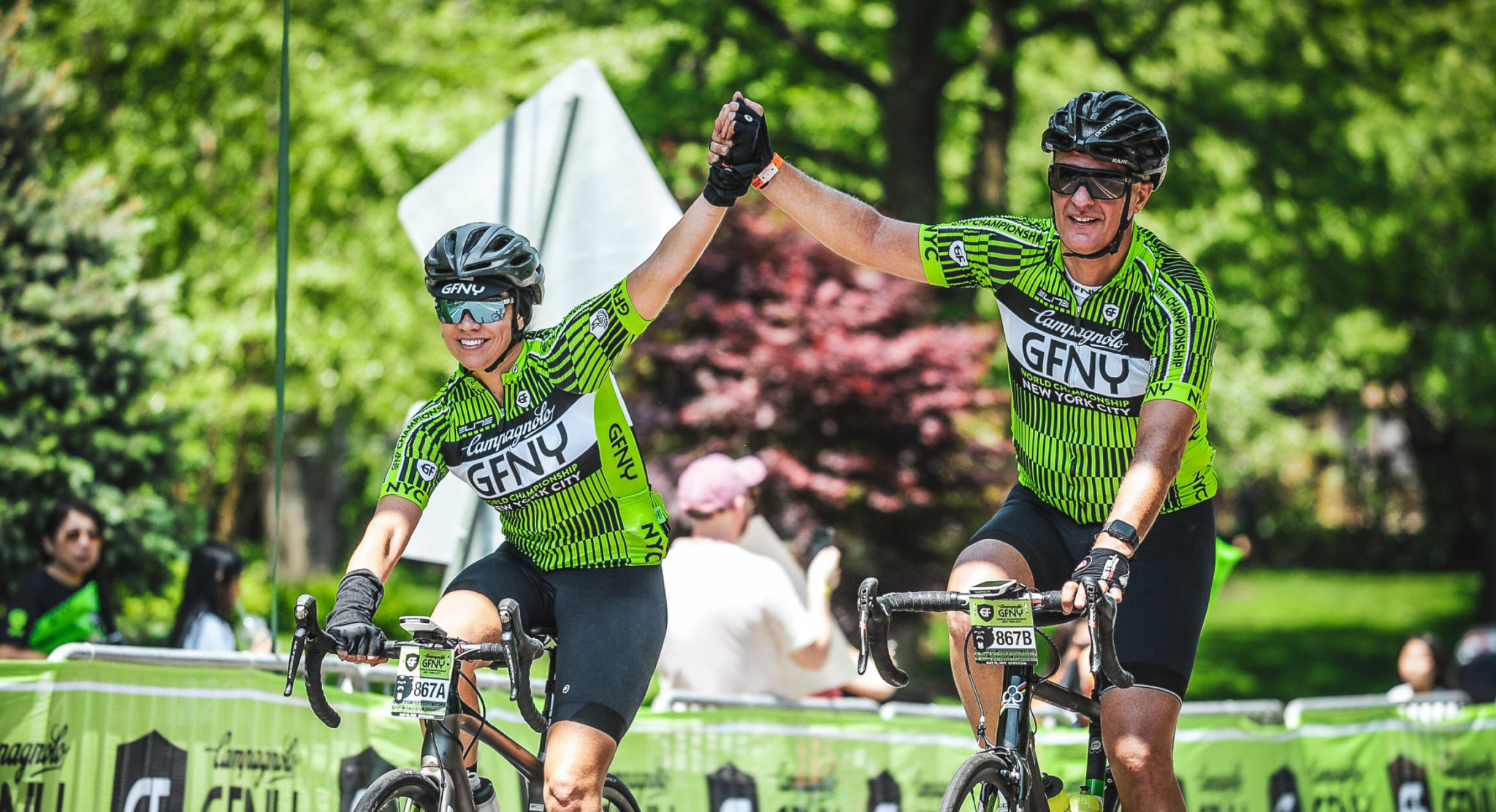 Him & Her is a two-person competition that requires teamwork to get through the race. Him & Her is a separate category from the Individual competition. Him & Her competitors are not eligible for Individual category rankings and also not eligible for the 4-person Team competition. Because it’s tough to find two cyclists of the same ability and fitness, pushing, pulling, drafting, dragging, laughing, cheering, shouting and any other means of working together is allowed. Because assistance is allowed, a time in Him & Her cannot be compared with or ranked among Individual competition times.The male and female team members have to finish within 30 seconds of each other. If they do not, they will be disqualified from the race for not meeting the category requirement. Because assistance is allowed, changing to Individual category on race day is not permitted.
All Him & Her teams are assigned to start together from the dedicated Him & Her start corral, except for VIP ticket holders who want to compete in Him & Her - all VIP ticket holders start from the VIP corral. Qualifier status does not affect start corral assignment if racing in the Him & Her category.
Finishers in the Him & Her category are not classified in Qualifier rankings. Qualification is only for athletes in the Individual competition. If you want to compete for Qualification status, you have to race in the Individual category.
The Him & Her team competition consists of two age groups: sub-90 and 90&over. Your racing age is calculated based on your age on December 31 of the race year. The two ages as of Dec 31 are added. If the total is 89 or less, the riders will be part of the Sub-90 Him & Her age group. If the ages are 90 or over 90, the athletes will be part of the 90&Over Him & Her age group.
Him & Her competitors are assigned similar numbers. Usually the numbers are A&B of the same number. If there is an unexpected number of changes to Him & Her category at the last minute and all A&B numbers are already allocated, the race organizer may also allocate similar or consecutive numbers. Similar numbers could be 95&195 or 280&380 or etc, or any consecutive set of numbers like 801&802. The numbering for Him & Her is established so the couple can be identified in the peloton as Him & Her and have it be obvious that their in-team assistance is permitted under the race rules.

The medium course is a non-competitive, recreational ride. Your total time is provided, but there are no rankings and therefore no categories. The listing of medium route finishers & their time is provided in alphabetical order.
If you want to race and be ranked, you need to ride the long route.

During registration, you select your preferred racing distance (medium or long), category (Individual or Him & Her), team name, jersey size, country represented and other personal data.
Making changes online: You can edit certain ticket information anytime until 21 days before the race by logging into your gfny.cc account and editing your ticket.
If you are unable to make a change and need help, please contact us.
Making changes on-site: If you miss the 21-day data changes cutoff, no problem - come to Registrations & Data Changes booth at the expo and we will make your category / data / distance change onsite.
If your jersey does not fit you, we offer a Jersey Exchange booth at the expo. We will do our best to provide an exchange jersey in, or near, your ideal size.
You can change your race distance even during the race. Your ticket is your entry into the race, regardless of the distance you complete. There are various check points along the course. As you pass various check points, the timing chip on your bike detects which course you are riding.
If you signed up for the medium route but are feeling great and want to take on the long course, you can. If you signed up for the long route and are not feeling like today is the day to accomplish this goal, you can switch to the medium course.
The timing company at the race is reviewing the points where your timing chip was detected and reclassifies any athlete to the distance they rode.

GFNY is open to Professional Cyclists

In the first four editions of GFNY (2011-2014), the race was only open to amateurs and ex-professionals who had retired their pro license more than five years prior. The GFNY Champions of 2011-2014 editions were either retired pros or semi-pros who chose to not hold a pro license. After reviewing our amateur-only rule versus the reality of who was racing and winning year after year, we decided there was no valid reason to continue excluding some athletes from racing and we opened GFNY to professional cyclists from GFNY 2015.

Our focus will always be on providing a great experience for every GFNY athlete whether they are competing for the win, a personal best or trying to beat the cut-off time. GFNY is a race, and anyone can toe the line and race.*

Be a Pro For a Day
At GFNY, just as at other endurance sport events like marathons and triathlons, age group athletes share the start line, the course, and the joy of the finish with professionals and elites.

The GFNY “Be a Pro for a Day” experience, means that all athletes share in the benefits of full course timing, controlled intersections, and a professionally organized race experience. Careful planning allows for professionals and elites to share the same mass start from the front of the peloton, GFNY’s Qualifier Corral.

With overall race rankings based on gun time, and category rankings based on chip time, the results are fair and equitable for athletes of all ability levels. Age group athletes gain the pro experience specifically from toeing up with pros on race day and being able to set their race day expectations on all the amenities afforded to professional athletes during the race.

GFNY will always welcome athletes of all abilities. The opportunity for age-group category athletes to race with professionals and elites is one of the many things that makes GFNY special.

More background
Twenty years ago, a cyclist holding a pro license was a professional who 100% earned his living from racing bikes. With the emergence of the Continental Pro class in the 90s, former Elite Amateurs became Pro License holders. Now, 25 years later, some Continental pros have to keep daytime jobs to support their cycling. And their opportunities to race long road races has waned as teams closed due to shrinking budgets and races ceased to exist due to rising costs. Simultaneously, as the number of cycling marathons globally grew, some pro-level athletes without a pro license started to target those races. There are many cyclists who devote their lives 100% to cycling even if they don’t hold a professional racing license. GFNY offers a race for all athletes to come together and do their best against each other, the clock and themselves.

Amateurs and professionals regularly toe the line together in running and triathlon. Take the NYC Marathon: it wouldn't be the amazing race it is without the professional runners but it wouldn't even exist without the committed amateur runner. Cycling is different in that it evolved into a team sport at the top level after the Second World War. And with that, team cars entered the peloton. While GFNY is open to teams, team cars or individual follow cars are not allowed because they would make the race unfair and unsafe.

For professionals and elites, the benefits of racing in a GFNY race are immeasurable. The long and challenging courses, competitive fields, and the number of events globally create dozens of opportunities each year for professional and elite cyclists to hone their fitness, put themselves on display, and race under professional conditions on professional-grade courses with other athletes of similar ability. This is not only a great opportunity for athletes, but this is also a chance for endurance sport to evolve (please read our White Paper on the future of professional cycling) beyond the traps of current professional formats into something truly special.

*Under accordance of GFNY Cycling Rules about Entry, for example:
2.1. The entry to GFNY is open to riders aged 18 or older. GFNY has the sole discretion over entry numbers and cut off dates.
2.2: Riders who are serving a ban by a federation for a doping violation will be refused. Riders who have served their ban are allowed to ride in the event but will neither be timed nor be in the results and will start at the back.