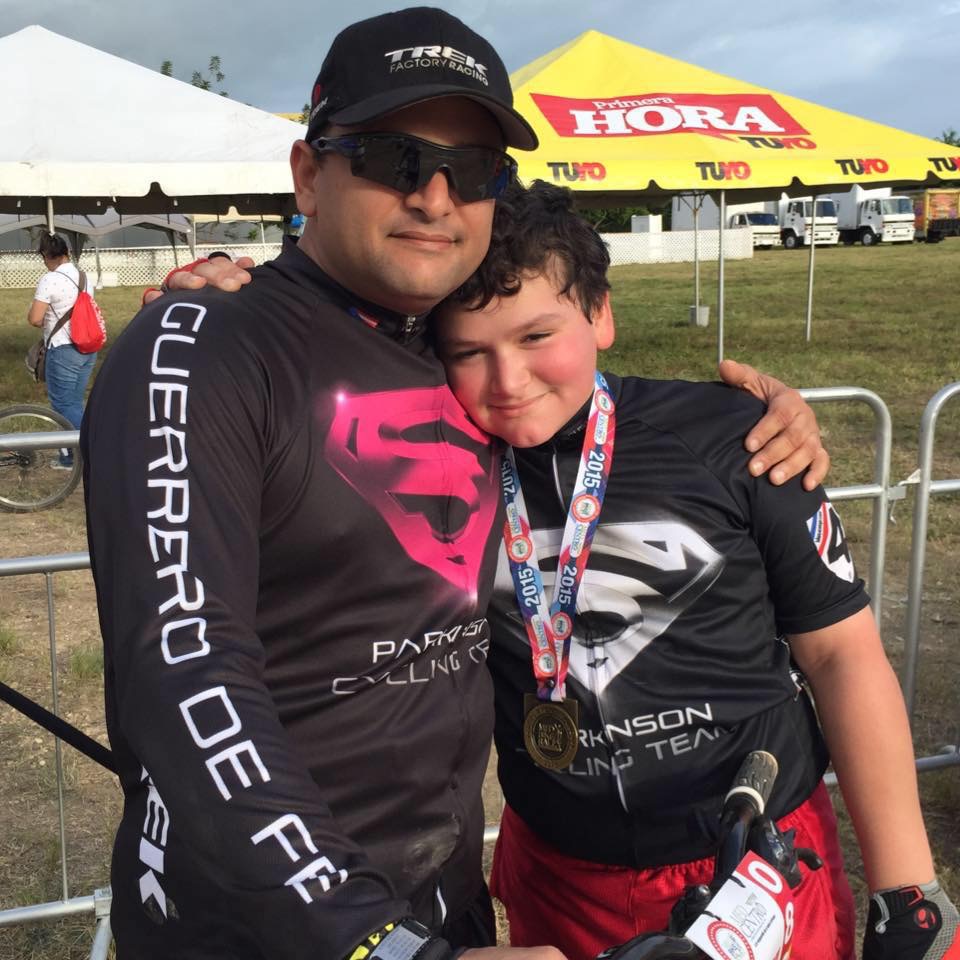 Alfred Ruiz, has three children. Like many fathers, in his children’s’ eyes he is Superman. The difference between Ruiz and most dads is he has Parkinson’s disease. His disease does not define him; instead he thanks it for making him a better person.

It has not been an easy journey of acceptance. Being diagnosed at 32 (Ruiz is now 45), the Puerto Rican was embarrassed of the lack of control he was loosing over his body.

“Imagine yourself just trying to get a glass of water that’s right in front you and your brain is commanding your body to grab that glass because you are thirsty, plain and simple, but you just can’t move because of the disease.”

But it is not always about the physical challenge of buttoning a shirt or putting on socks. Over the past 13 years Ruiz has watched his daughter being born. Knowing he would be unable to pick up his newborn out of fear he may drop her was a huge emotional strain.

“I never expected to face a challenge like this disease at such a young age. In the beginning I didn’t even go out because of my tremors and the involuntary movements caused by the Parkinson’s.”

Ruiz lived life in those days in anger, blaming the world and falling into a horrible depression until one day he decided enough was enough.

“I never knew how strong I was until I was faced with no other choice and decided I had to make a difference. I can’t give up because my family needs me. I asked myself how can I tell my children not to give up if I am the first one to give up. We lead by example and from that day my life changed for the better.” Recalls Ruiz.

Discovering cycling two years ago from a friend in a more advanced stage of Parkinsons opened up a whole new world to Ruiz. Having never ridden a bike before people told him he was crazy to start but has now been riding for two years with 100% support from his current neurologist.

“Thankfully I never listened. Yes, it has been tough but I would do it all again in a heartbeat.”

He found an outlet in the form of his ‘Zen place’ called Cardiotek Cycling and Monday thru Thursday can be found cycling away any pain, anger and frustration. It is Ruiz’s way to prove, not to just himself and his family but to others with and without medical conditions around the world that there are no limitations to what you can do with a lot of faith, determination, love and courage.

Weekends are when Ruiz takes to the road for training. Starting at 4:30am the side effect of insomnia and 3-4 hours of sleep per night ironically works to Ruiz’s early morning routine.

“I ride my bike because it gives me life. I choose to ride Campagnolo GFNY 2016 because it’s a huge challenge. I may be the last rider to finish but I do know one thing I WILL NOT QUIT AND I WILL FINISH no matter what it takes.”

Learn more about Ruiz and his cycling in a video that will be shown this September at the 4th World Parkinson Congress to be held in Portland this year. 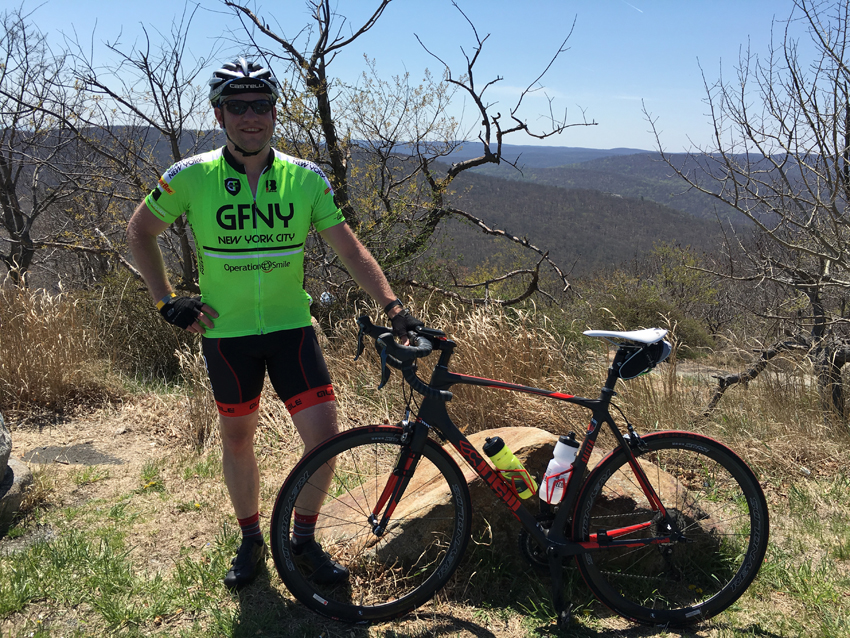 Learning to walk again is like training for a Gran Fondo. If you don’t put the work in you are not going to do it. That’s what Dr David Harrell believes and who am I to disagree.

In 1996 whilst working on his first PhD at the University of Georgia, Dr David Harrell (43) was struck by lightening.

Harrell recalls nothing of the one in a million occurrence. He is left with a reminder in the form of an entrance and exit wound on his back. Suffering severe nerve damage and left with near paralysis of the right leg and severe weakness of the right arm, Harrell was left wheelchair bound and told for the second time in his life he would never walk again.

The first instance was age four, when as a toddler he underwent major hip surgery. He defied odds then not willing to accept the hand that doctors had prescribed him.

Against all odds he is walking again. Against everything every doctor he saw told him. The scientist in Harrell and a stubborn Scottish streak would not give up without a fight.

“I saw numerous physicians over the years and they all said the same thing, that I need to embrace this,” recalls Harrell. “Well, my mum had polio during WWII and I watched her battle and not give up, she was a great source of inspiration.”

Harrell relates learning to walk again much like training for Gran Fondo. If you put in the hard work you can complete it. Perseverance is a word he repeatedly goes back to. Without it he would still be in a wheelchair.

Cycling is a recent discovery that opened up a whole new world to Harrell.

“I went into the chair weighing 165 pounds and nine years later when I finally got out of it I was 285 pounds and a further 12months away from walking on my own power.”

Out of shape but grateful for every step he could take, to combat the weight gain he last year purchased a commuter bike and started commuting to work by bike a few days a week.

“I fell in love with cycling and having a means of exercise that allowed me to also transport myself to and from work in a shorter time frame than driving or taking the subway.”

A move from Boston to New York at the end of last November provoked Harrell to finally purchase his first ‘real’ bike and it was a generic search on the Internet for ‘cycling New York’, where he first learnt about Gran Fondo.

“I had never done any organized ride and my first group ride was the first time I’d cycled with others. Until that ride, the farthest I had gone was 37 miles. That day we did about 62 miles. I couldn’t believe it. It felt amazing and wonderful. To be able to do that was incredible.”

It was also painful, but for Harrell the pain is always there and he deals with it on a daily basis.

“You know, it sucks to do a 96-mile road ride on one-hour sleep but there are other people that didn’t sleep and are still out here. Everyone has challenges and life is about taking on one challenge at a time until you get to the top.”

At the end of the day to be able to get on his bike and ride with his cycling ‘family’ Harrell feels like he is winning every time especially when ascending Bear Mountain on a group training ride feeling unbelievably strong.

“That ride was a very special moment for me. I was feeling great and looked out at the view and thought oh my God I climbed that on a bike. If I think back (over the past few years) that was never supposed to happen.” 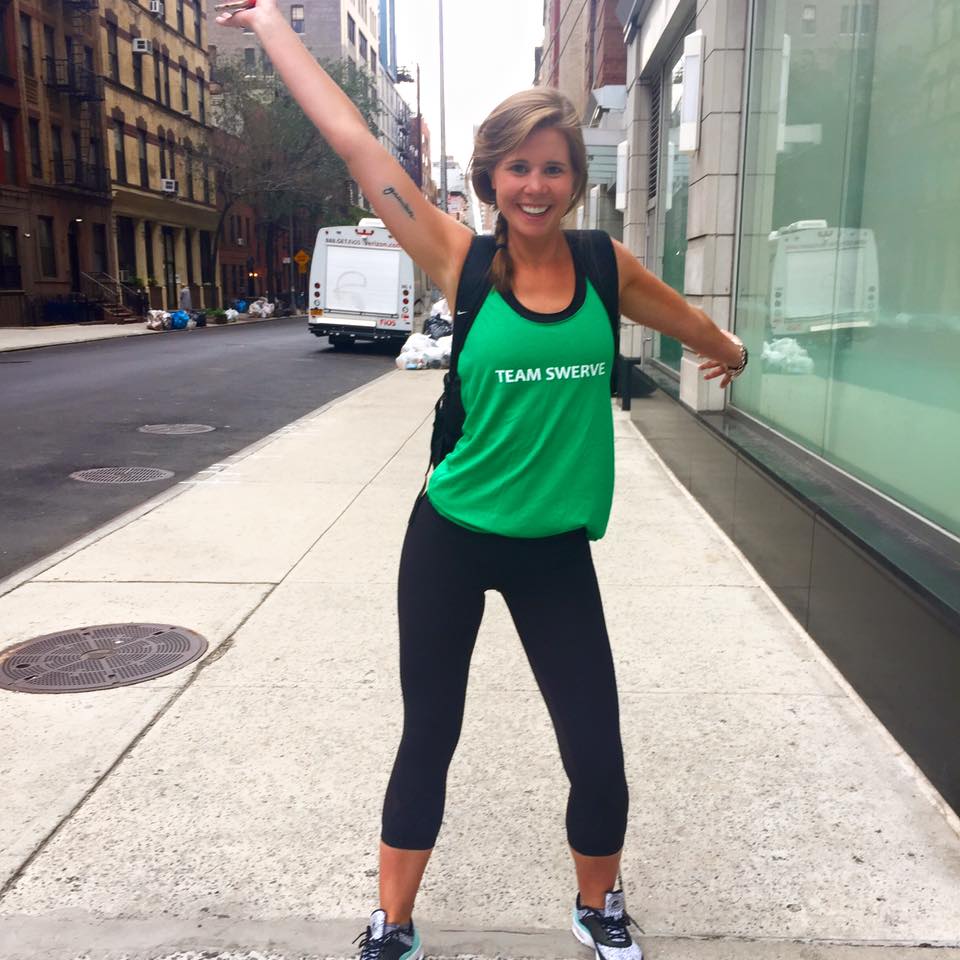 French and economic major Katie Sullivan was young and independent with a bright future ahead when in a split second everything changed.

Sullivan’s life was put on hold and the 23 year olds newly found independence stripped away when a cab hit her at 30mph. The last memory she has is leaving Gramercy theater in New York, crossing 23rd and Lexington.

“I woke up in ER at the Presbyterian Cornell. I had broken my leg in two places, shattered my humeral head and broken almost all the bones in the left side of my face including my eye socket, nose and lost six teeth.” Tells Sullivan.

Her first memory post accident was her front teeth being pulled forward.

“I was in hospital for two and half weeks, I couldn’t talk as my jaw was wired shut and couldn’t walk. Those first few weeks involved A LOT of morphine!” Sullivan now jokes.

Less than 72 hours later surgery began on reconstructing her shattered face. Taking seven hours and using three separate bone grafts from her skull, a new nose, mouth, and cheek were created. Were it not for two small incisions behind her ear, today you would not have known the trauma Sullivan went through.

There have been numerous follow up surgeries and other minor surgeries on her knee and shoulder and finally, in February of this year Sullivan had her last surgery.

“I am not uncomfortable in hospitals, but I am so done with them.” Sullivan says of the whole experience. “The chapter is closed, I can now move on.” She says.

And move on she has.

Active in sports, (playing DI lacrosse at Colgate university), she was told numerous times that being healthy and active was crucial to a rapid recovery.

“I was not used to being dependant on others and suddenly being back with mum was a very strange. If I was hungry I had to ask her to get me some soup, if I needed the toilet she had to assist me. I had to accept being dependant again and that was hard.”

Having spent two months ‘healing’ in the wheelchair, one day the doctor asked her to get up and walk, and she did.

“I was terrified. I had been sitting down for two months and to suddenly get out of that chair was very disorientating.

Once Sullivan was able to walk she decided she should try running and then if she could run she should choose a goal. She completed her first ever half marathon in April 2014.

From running to cycling and Sullivan discovered the world of cycling and triathlon when she started working as a brand and marketing manager at Swerve Cycling Studio.

“One of the instructors convinced me to do a sprint triathlon last summer, I have since done two and finally committed after renting a bike all last summer and brought my own bike.”

The next challenge is 100 miles this weekend.

“My brother (I have three) found the race. We are so close. He is my best friend and I said if he was going to do it I would do it.”

Sullivan knows she has a different look today but her positive spirit remains intact. Her attitude before the accident was always positive and outgoing. But, if anything has changed she try’s to make every day count.

“It is cliché but it is so true. My go to motto in my head is you should do this because you can.  I really have no other limitations than mentally, and those are limits I can control.”