Tales from the A-Train — Festivus Edition

Written by GFNY on December 28, 2018. Posted in Uncategorized.

Pardon me, Conductor, does this train stop in Drop City?

It was as beautiful a Festivus morn, as I can remember since Seinfeld brought everyone outside of the Costanza household the notion of Festivus back in the innocent days of 1998. Sunny, crisp, I was running late, an still only on my first cup of coffee. Let’s just set that as the theme. Being in a rush. Off the back from the very beginning. Not to be a spoiler, but to be a spoiler, and let you know how it ends. If you follow me on Strava, you already know that I didn’t hang on. But it was Festivus, and not even a trip to Drop City could run the perfect holiday! 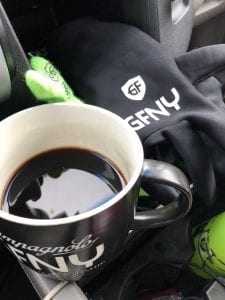 Ready for A Train action

Finally arriving at Strictly with 10 minutes to spare, I made the mistake of ordering a cup of coffee. I didn’t even have time for it to cool down before the safety talk had begun, and I had a Facebook Live feed going of Frank’s safety speech. Before I realized how close to the edge that I was, Frank announced that the A group was ready to go:

Where are you heading Thomas?

…and that’s all I got. It would have to do. They were pulling out. I shut down the camera, and threw out the coffee (this was a prize winning cup of coffee by the way — and it physically hurt me to throw it out), and jumped on the SK. I was on the chase already. WIth the group reeled in, by the first mini-hill, and with an unrelenting pace, I was in zone 3 by Pallisades Avenue. 2 kilometers in.

First lifeline — Pallisades Avenue. This is not going well.

Out on to 9W I did my best to stay along. The pros were out today. I could hear the voices from the GFNY podcast echoing that the most experienced riders, don’t feel the need to go off the front and prove themselves. They just tempo out with the ride leader, calm, cool, like they have done this before. This was how it was working today. It was an organized and orderly paceline up 9W. I was yo-yo-ing already. Maybe it was my Saturday ride, maybe it was jet-lag, maybe it’s just that I am not that guy yet. I kept pressing but I could definitely feel it slipping away. After East Clinton, Thomas rode back. He had been turning to check that the group was complete all the way up, but he seemed concerned about me hanging on.

I don’t think I have it today Thomas — please go ahead — I have burned too many matches just holding on.

He advised me on the wind, the right positioning. This would have of course worked to bring along any cyclist who was capable of holding that speed that day. I was not that guy.
Too many matches. I said it again.

Great. That will be 2 matches per mile. I will need every one of them. I kept pressing but as the road ticked up slightly toward Kiku, I couldn’t hold the back. Stopped at a light at Pallisades, I could see, but I could not contact the group. As I hit Kiku, they disappeared over the edge, on their way to State Line. They were up and over out of my site. As I got to the bottom of State Line I thought I saw them but I could not be sure. The clock on solo miles was now running. I decided to take the B group route. As I turned left on Oak Tree I realized it was way to cold to wait for the B group. We had left a few minutes ahead, and it would likely be 10–15 minutes of freezing to wait for them, so I pressed on.

Process — keep pedaling — keep going at the pace that you would hope that you could hold .

Outcome — we shall see. 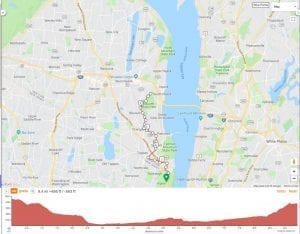 Over State Line to Bradely. I was chasing back on.

As I hammered through the Rail Trail, I wondered if I was course cutting or if the group had stuck to the plan. Only one way to find out. I emerged from the trail and saw a bike turning on Kings Highway. Not with the group. As I overtook him he held my wheel and made a point of letting me know my chain needed to be oiled. Thanks for that. I took him to the foot of Bradley, and began to climb as he veered off to continue straight. I was winning. Whether I stayed with the group or not, this was the ass-kicking I wanted, the ass-kicking I needed. I started to find a rhythm on Bradley as I made the turn to keep going toward Tweed. As I passed Schuyler my legs hurt from the effort the day before. Glad I wasn’t going that way today. Hmmm…maybe don’t get too happy.

As I rolled up Bradley, halfway up — there they were coming down. A Festivus Miracle that I was able to catch them post climb. Do I keep going, or do I turn and go with them? To think it through, I remembered that I signed up for the group ride, not the ride alone with your principles ride. I turned, and chased on. Lifeline number 2 (although this was a climb cut). As we meandered toward Rockland Lake, and through Nyack, I thanked everyone for regrouping.

Dude you were suffering before the climb….

This was not untrue. I was. And I was continuing to pay the fiddler in trying to hang on. After making it over Toga and down to Rockland Lake with the group, Ari pointed out that I may have had a second wind. We shall see, Ari, we shall see.

Out Lake Road, and over to 303. A beautiful chase over the reservoir — and it was a chase — to Ridge Road. Lifeline number three as Thomas waited to recollect the group at the left turn after the reservoir. We made our way back into Old Tappan and I had to chase several times to keep up.

It was going to be a tough close to the day. But as Peter pointed out — it was an unbelievably beautiful day to be out on a bike. He was absolutely right.

The day itself was a Festivus miracle.

That didn’t mean my own bag of miracles would not run out. As we found our way back to Oak Tree, and climbed the steep kicker from Piermont Road, I struggled to maintain contact. As the group got to 9W a wave of relief came over me. I knew the route home. I would be dropped on the climb. But I knew my way home. But somehow, someway — they crossed 9W and kept going. I was stopped by the light. It was time to solo home. 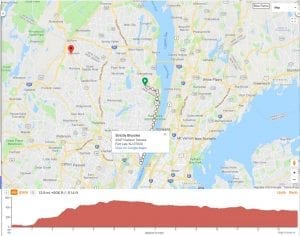 The road back to Strictly

Too many lifelines. Too many chases. But somehow I was proud of the ride. I couldn’t figure out where and how they had gone. They were not there when I got back. Within 10 minutes or so they had arrived. I could barely move. I missed a few miles and had some catching up to do, and as this is Friday night, it’s almost time to try again on Sunday. Hoping for a New Year’s miracle! 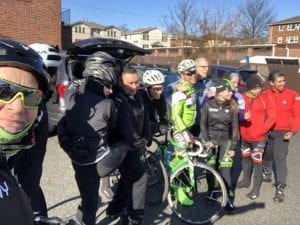 The gang back at Strictly