The End of the Race is Nigh

But do not despair…It’s merely the End of the Race vehicle. This is where I found myself on May 20, 2018. While I had hoped I could race, circumstance, a culvert, a few non-displaced fractures, and there I was.

The De Rosa | Gavia Cycling camp was in full swing, during the week leading up to GFNY Championship NYC. With crutches and a thermos full of coffee I took on the role of driving the team car, and providing support, directions, and the ability to drive by the riders yelling “ALLEZ! ALLEZ! FORZA RAGAZZI! If you ride like that on Sunday — the money is up the road and you are through! Let’s GO!” The combination of fake, yet polite laughter, and the telepathic thoughts of “slow that car down you bastard, and I will ALLEZ your face off!”. (This was especially true while they were climbing, but as usual, I digress). 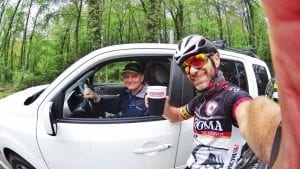 Me and Mr. Wolf (Mirko), pausing for the nectar of the godz — a little coffee, this time NOT in the middle of a race.

Or maybe they liked having me around. It was tough to tell. The mind does wander to the smart phone while waiting for a half a dozen cyclists without motors to get up and down Bear Mountain. The posts from GFNY HQ kept getting more exciting, and missing out on the day just felt impossible. With three starts on the bridge, and one start with a walk of shame on the bridge, I would have been about to finish my 5th, and so the though of not being part of the race was a little tough to handle. Time to put the smartphone to good use.I reached out! (text thread is abridged to protect the innocent and may actually be written in subtext):

M: dude, crashed, out of race, lack purpose, direction, motivation to continue, need meaning on May 20.

U: dude, had a feeling this was coming. Can U drive

So let it be texted, so let it be done. Was on my way to driving the End of the Race vehicle. For the uninitiated, the End of Race car sets a pace that is commensurate with the cutoff time. Drive over the bridge after the last riders, and keep a pace that reaches Fort Lee at 5:30 PM. For anyone you pass, you notify them that the race is moving on, and while they are OK to keep going and finish, all the support is now ahead of them. For those who race, this could be a sinking feeling.
In 2014, at 155lbs, I never saw the end of race vehicle. It wasn’t until 2015 when I saw it as I approached Mott Farm Road. It was coming in the opposite direction, toward Bear Mountain, as I was getting ready to start climbing again to the unforgiving back half over Mott Farm, Pinarello, and Cheesecote. My elapsed time that day, was 7 hours. That should give you an idea. In 2016, having a not great day, and not great season, I saw the car climbing Bear, as I was descending. I stopped in Ramapo that day and it took me 45 minutes to find myself and the will to continue. I signed up at Gavia to be coahed by Vito Valentini the next day. In spite of my difficulties in 2017, I missed the car again, before meeting the Bonk in Clarkstown and limping home. 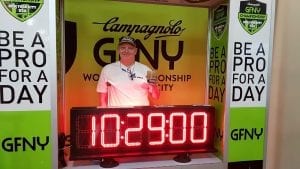 With an early start time of well before 5AM, I met my partner for the day Cherie, at the foot of the bridge before we proceeded up the ramp to the start area. We were given supplies like water, gels, and instructions on how to brief the riders we would pass. At the bridge, we were kitted with the light bar, and we would roll as the convoy did, the last vehicle to cross the bridge. 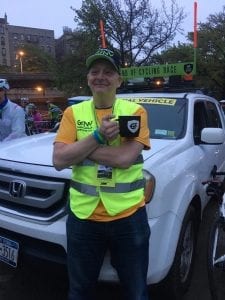 Not racing, but proud to be wearing the GFNY logo. The bike leaning up against the car is Frosty! Frosty has spent a lot of time leaning on, or being carried by the car you see — also known as the Gavia Cycling White Whale. We warn that you not refer to the driver as the White Whale — it never ends well!

Cherie was a pro. This was not her first rodeo, her first GFNY, or her first time in the end of race car. She had a great demeanor for speaking to the riders, and a completely professional outlook on how the day would go. There was a lot to this, and a co-pilot was critical. In addition to talking to the riders, Cherie plotted what time we should be at each turn, had water ready for the riders, and kept communication with the command center active so that they knew where we were at all times.

As we commenced, it was mostly phoning in support. It was early, still a little cool and we couldn’t give any water away. It was all good and people were making their way. We had a number of Bear 50 riders we were seeing once the speed of the full course got going through the park and up to the first climb at Alpine. For me, I knew the course. Where the turns were, where the climbs were, and where riders may be in difficulty. As you might expect, the first forty or so miles were pretty uneventful, mostly flat tires, that we would identify for support when they were not already there (most of the time they were), or simple mechanicals that someone was already working on. It became very clear, very quickly, that some of the things that you take for granted while you are racing, are so professionally done. Hearing the motos and support cars communicate, made me feel like I was driving in a convoy in a World Tour race.

When you race any GFNY World event, you see motos, you see support wagons, you see the broom wagon (sometimes you and Massimo see it together), you see the rest stops, and you see the police. The police spend the entire day keeping the race moving, and keeping the race safe. When you slow down and take a look, you get to experience every detail, the sheer number of supporters, drivers, police officers, and volunteers that it takes to create an unbelievable experience for 5,000+ racers. It’s absolutely staggering.
The day was all about tight communication, talking to riders in difficulty, providing encouragement, and helping out however we could. As we got through Haverstraw and closer to Bear Mountain, the day started to heat up. The water that no one was interested in for the last 37 miles was suddenly a hit. We got up and down Bear as the gate was closed for Perkins. The last of the Bear 50 riders were on their way up, and the last few that got up before the cut-off were on their way down. They had successfully completed the challenge and were ready to bask in the spoils of their finisher medal and the knowledge that they had tackled a tough course.

It was time to move into the back half of the course. At various times during the training season, we spend time focusing just on this part of the course. The grades kick up with a maddening frequency providing a true test of your climbing capability. You have just climbed Baby Bear, Bear, back over Baby Bear, and now move toward Mott Farm Road. A sharp, steep, hairpin turn that introduces you to what the next 60–90 minutes of your life are going to be like. You continue to climb on Mott Farm before the respite of a quickie descent, a right turn, and then the sharp kicker of Queensboro and up to the quick descent and base of the Andrea Pinarello, with little respite before Cheescote. Knowing that was ahead led me to look at Cherie and say “I think it’s getting hotter, and even though the temperature is not that high, once you start climbing that sun will bleach you dry”. From the air conditioned purview of the white whale, we started to notice riders stopping here and there. With water and gels to provide we were able to provide some relief to riders that were running dry between rest stops.

On to the climbs. Some riders I knew, some riders I didn’t. The situation was explained, we were keeping a pace, and as we move on, so does the race. But as these brave riders heard the news the response was usually, “but I can finish, right?”.

I began to think of how grateful I should be for all the riding I have had the good fortune to do, all the races I have been able to complete. The good days, the bad days. Somehow, replaced at some point by the wattage, and the cadence, and all of the data that starts to take over your cycling life as you start to get deeper and deeper. But what does it really mean? In 2007 I did my first cycling event and barely finished. I had no data except for “I think I left the parking lot around 7, and I got back to the parking lot around 5”. I was never prouder. We all have goals, and every rider we talked to had their goals in site.

More and more as the roads tipped up, and got seemingly close to the sun, the water was flying out the windows of the whale. Folks were asking questions, and we were keeping a careful count. Punctures on the side of the road had been replaced by leg cramps — but they were not deterred from meeting their goals and finishing the race.
When we crossed the finish line, with a view over the dashboard of the kite that marked the end, I had a greater appreciation for GFNY than ever before. As a rider, it’s provided me with life lessons, a great coach, friends, and a second family. As a driver I was honored and privileged to see the sheer determination that develops in competing, completing, and coming back for more.